Sacrament: “an outward sign instituted by Christ to give grace.”

The sacraments are given to us by Christ to fill us with his grace. They are the divine helps which enable us to:

We are glad that you are interested in learning more about the Catholic faith. Our faith is rich in tradition and welcomes all people into the Body of Christ, the Church. Wherever you are on your journey, know that you are welcome here.

The sacrament of baptism is the door to new life—supernatural life. This sacrament has been undisputed in the Church since the beginning of Christian tradition. Because of original sin, we come into the world with only the natural endowments of human nature. When the sacrament of baptism is administered, the spiritual vacuum–which we call original sin–disappears as God 's own life becomes present in the soul, which we call sanctifying grace.

It is of great importance that parents, moved by their own faith, or with help from friends or other members of the community, should prepare to take part in the rite of understanding. We recommend parents contact us before the birth of their child. Please fill out the form below to notify us of your desire to have your child baptized. We will contact you to answer your questions and help you prepare for and schedule your child's baptism. In addition to baptisms during a weekend Mass, we offer baptisms at 12:30 pm on the 2nd and 4th Sundays of the month.

Holy Eucharist is both a sacrifice and a sacrament. The word Eucharist comes from the Greek word "eucharistia," which means “a giving of thanks.” Scripture tells us that at the Last Supper, Jesus “gave thanks” as He took the bread and wine into His hands. The Mass is the divine action in which Jesus, through the free and willing instrument of the priest, changes the bread and wine into His own Body and Blood, continuing through time the offering of Himself for mankind. The change from bread and wine to the real presence of Christ is called "Transubstantiation".

Eucharist for the Homebound

St. Dominic Catholic Parish has a ministry to the sick and homebound in which trained members visit, and offer Eucharist when desired and requested by homebound parishioners. If you wish to bring Eucharist to someone who is ill and unable to attend Sunday Mass, please contact us to prepare for this ministry. Some of the procedures include always carrying the Eucharist in a pyx, keeping it in a safe spot, and treating it with utmost reverence. The Eucharist should be brought to the homebound person directly following Mass or upon receipt. Instructions

All children who are of the age of reason (age 7) are eligible to prepare for their first Holy Communion. Preparation includes:

One important spiritual goal centers on the serenity that comes with making peace with God in the sacrament of reconciliation. The power of the Lord's healing mercy and forgiveness experienced in the words of absolution is one of the greatest gifts entrusted by Jesus to his Church. What a wonderful gift is yours for the asking! All that is required to receive the healing forgiveness of absolution is a contrite heart of sorrow for the sinful realities we confess before the Lord.

Preparation for the Reception of First Reconciliation

All children who are at the age of reason (age 7) and above are eligible to prepare for their first reconciliation. Preparation includes:

Through the Eyes of 2nd Graders:

"I felt warm in my heart...." ~Bradley
"I felt scared before I talked to the priest. I felt good after he talked to me." ~Lauren
"I felt good, very good!!! The priest told me to do something and that is why I cleaned my mom's car!" ~Jake
"I feel I am going the right way to God. I felt like an angel. I felt like I was with God and Jesus. I felt like I never felt before." ~Nicole
"I felt good when I confessed my sins because when I was done, I prayed for three people, I really love them." ~Camryn
"Reconciliation was easy. It was easy because I said only one sin. He told me a penance that was easy to do. At first I thought it was hard but then I realized it was easy." ~Jack

Confirmation is a community's sacramental celebration of an individual's mature and personal affirmation of the gift of faith, which seals the work of the Spirit begun in baptism. It is the last of the sacraments of initiation, which are the foundation of a Christian life.

Confirmation deepens our baptismal life that calls us to be missionary witnesses of Jesus Christ in our families, neighborhoods, society, and the world . . . We receive the message of faith in a deeper and more intensive manner with great emphasis given to the person of Jesus Christ, who asked the Father to give the Holy Spirit to the Church for building up the community in loving service. -from the United States Catholic Catechism for Adults 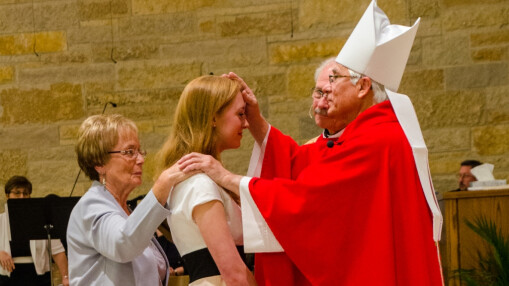 High School Students who are at least 15-years-old and entering grades 11-12, who are ready to answer the call to be missionary disciples are invited to apply for one of our two semester-long intensives which include a weekend retreat experience. Candidates will have already received the Sacraments of Baptism and First Communion, and progressing through our parish discipleship process. Learn more about our Confirmation process here. 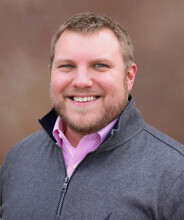 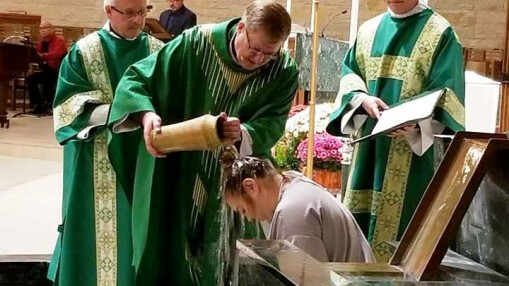 Through adult confirmation, you will learn about the teachings of Jesus as the Catholic Church has handed them on, and also have the opportunity to participate in the life of the parish through service and prayer. Topics covered include prayer and spiritual life, an introduction to the sacraments, understanding the Mass, Scripture, and Catholic social teaching to name just a few.

First, congratulations on your engagement! We look forward to being a part of this wonderful moment in your lives!

"You want your wedding to be beautiful and perfect – and we do too! The beauty you’re hoping for points to a hope much deeper – a joy-filled, solid marriage. Your engagement is not only a time for planning your wedding, but a time during which you build the foundation for a lifelong marriage rooted in Jesus. In a world where so much seems temporary, the Church is here to help you prepare for a lasting marriage, one that is fully open to all the grace and blessings God wants to give you through this sacrament." ~Archdiocese of Milwaukee

Getting Married at St. Dominic

The marriage preparation process at St. Dominic Catholic Parish begins with time set aside to meet with you to discuss your wedding and to talk with you about your desired date and time.

Marriage is more than a commitment. it is a vocation, a vocation to share with each other, their children, and society the faithfulness of God. A husband and wife, with the grace bestowed by Christ through their marriage, are entrusted with the responsibility of helping each other to grow in holiness. A couple's love is a testament and a reflection to the world of God's faithful love for us.

For Your Marriage is an excellent resource offering guidance and resources that help promote, strengthen, sustain and restore marriages. Consider subscribing to their monthly newsletter, which provides inspiration and thought-provoking content.

Marriage and Family Formation is an office of The John Paul II Center, which exists to build up the Body of Christ in the Archdiocese of Milwaukee by providing an authentic, Catholic vision of Sacramental Marriage as an icon of the love between Christ and His Church.

The Key to a Successful Marriage video is from Catholics Come Home. Take time to learn more about the Church’s teachings on marriage and explore the resources this site has available to help you better understand and live out this beautiful sacrament.

The sacrament of anointing of the sick is celebrated every Friday morning at the 8:30 AM Mass in church.
In addition, you may contact one of the priests to arrange for the sacrament at another time.

When the sacrament of anointing of the sick is given, the hoped-for effect is that, if it be God's will, the person be physically healed of illness. But even if there is no physical healing, the primary effect of the sacrament is a spiritual healing by which the sick person receives the Holy Spirit's gift of peace and courage to deal with the difficulties that accompany serious illness or the frailty of old age.
~from the United States Catholic Catechism for Adults

The Church teaches that the anointing of the sick is for those who are approaching surgery, are ill physically, spiritually, or psychologically. A person need not be in danger of dying. The sacrament can be received more than once over the course of an illness if the person's condition gets more serious. We encourage you to request this sacrament early during the course of an illness or prior to surgery.

"Last Rites," more properly known as Viaticum (which means "food for the journey") refers to the reception of Holy Communion by a person near death. It may be administered by a deacon or layperson, in addition to the priest.