Only All for Jesus 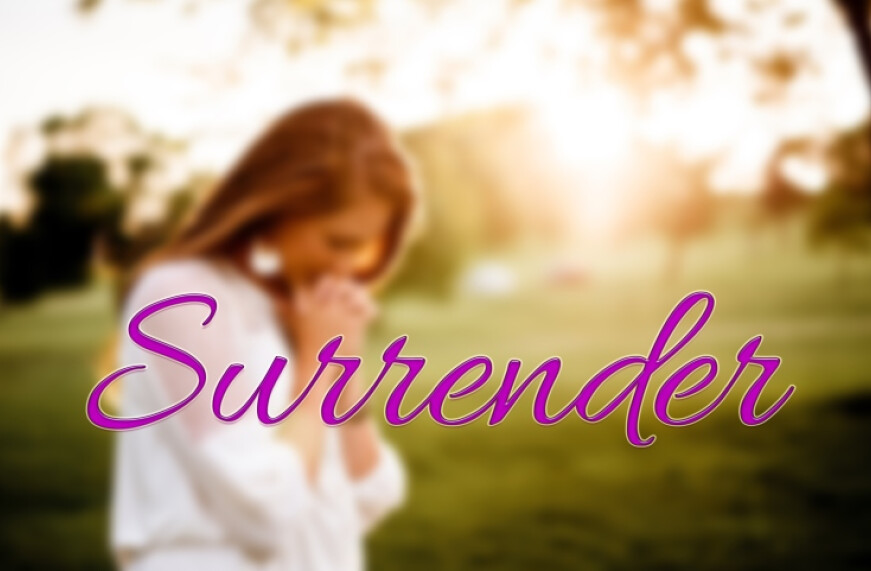 Every day, I begin my day in prayer. The routine is very simple but well-rehearsed. It is the same prayer I have had for the last nine years. As part of my routine, I pray that I be the vessel by which the Lord fulfills His work. It is a prayer of surrender. Surrendering is not new to me, I have lived my life in surrender to Jesus Christ since I was sixteen years old. When I get that "feeling" it usually falls in line with a moment of change, a moment of conversion at the climax of surrender. We are meant to go through multiple conversions throughout a lifetime as we grow into a deeper relationship with Jesus by surrendering to His will. I recently had one of those moments that moved me deeper into conversion resulting, once again, into surrendering. It is then that I started having that "feeling". I am now left waiting to see what the "feeling" is going to bring. Since my announcement to transition out of the principalship, many have asked what I am doing next. I truly do not have a “next”. I am open to the will of the Father. He will make my path clear but until then, I am here.

Many Saints write about conversion and surrender, as it is a pathway to holiness. St. Mother Teresa of Calcutta would say, "We have to love until it hurts. It is not enough to say I love. We must put that love into a living action. And how do we do that? By giving until it hurts". This loving until it hurts is conversion. It is surrender because it is counter-cultural. St. Faustina brought us the depiction of surrender through the image of the Divine Mercy and the simple yet powerful prayer "Jesus, I trust in you!" Releasing oneself to the will of the Father is liberating yet terrifying.

It is not enough to say yes to God when he has called us for himself. It's very important to put that “yes” into a living action. And how do we put that into a living action? By our total surrender to Him. We understand that He has chosen us for Himself - all that follows is that we allow Him to use us without consulting us. We are human beings and we like to know exactly what He wants, how He wants, and so on. But if we really want to be only all for Jesus, it is important that we give Him a free hand to do with us what He wants, as He wants. Only then can we really say we are only all for Jesus. - Mother Teresa of Calcutta, Thirsting for God, 2000.

The Ambo: Where God Speaks 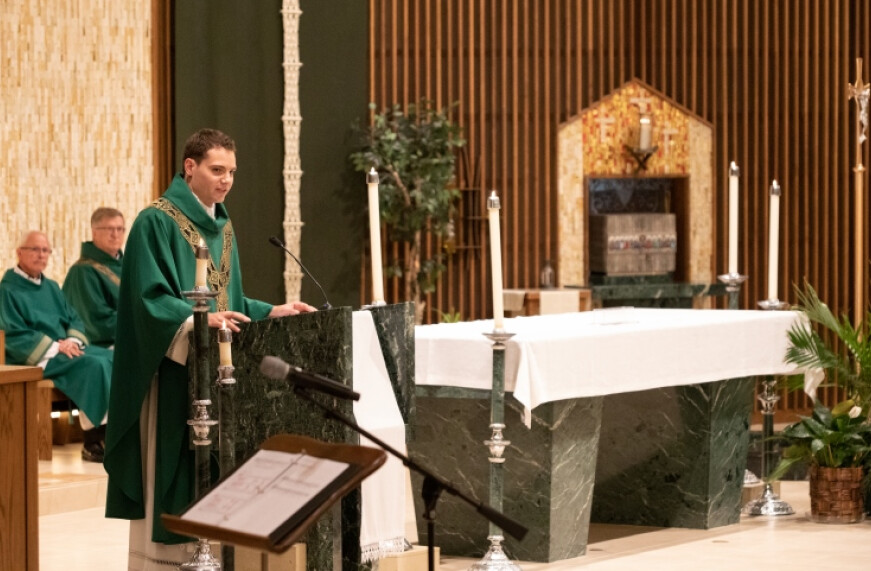 Today I would like to speak about the ambo. With modern technology it can seem a little strange why we would spend a bunch of money on an elaborate book stand such as what we have here at St. Dominic. It might make sense in the old days for sound to make it easier for people to hear and such, but now it doesn’t make much sense.

That is of course if we look at it from a practical perspective. From a theological perspective it makes all the sense in the world and it reminds us that the ambo holds a special place in a church. The word “ambo” means/signifies an elevated or raised area and this is key.

Because the Word of God always descends down upon us. Whenever God speaks it is always from above. Moses goes up to Mount Sinai and brings down the Ten Commandments. Jesus gives us the Beatitudes on a large hill on what is known as the Mount of Beatitudes, the apostles go to the Upper Room and receive the Holy Spirit at Pentecost, and here at Mass the lector comes up the sanctuary to the ambo where the readings, the Word of God is proclaimed and descends on us.

The General Instruction of the Roman Missal says, “When the Sacred Scriptures are read in the Church, God himself speaks to his people, and Christ, present in his word, proclaims the Gospel.”

I love to think of the readings as gentle rain falling on our souls. Nourishing us, refreshing us, preparing us to receive the Eucharist which becomes the life of Christ within us. So that we may embody what we have just heard and consumed.

That is why the ambo matches the altar, because it is at the ambo where Jesus speaks, it is at the altar where he reveals himself to us. We often hear someone before we see them. The readings prepare us to be able to recognize Jesus in the Eucharist. Without the readings, without hearing his voice, we will never see beyond the veil of bread before our eyes. We will never see that it really is Jesus before us.

I think that is why it can be so difficult to pay attention to the readings at Mass, because God will never shout or force his voice into our hearts. Like we hear from the prophet Elijah God is not in the earthquake but the whisper. We must intentionally strain our ears to hear him. We really have to work hard to pay attention.

And so the ambo is reminder to us that God still speaks to us today. His voice is not trapped in the past, but spoken to us in this very moment. We only need the ears and desire to hear him. 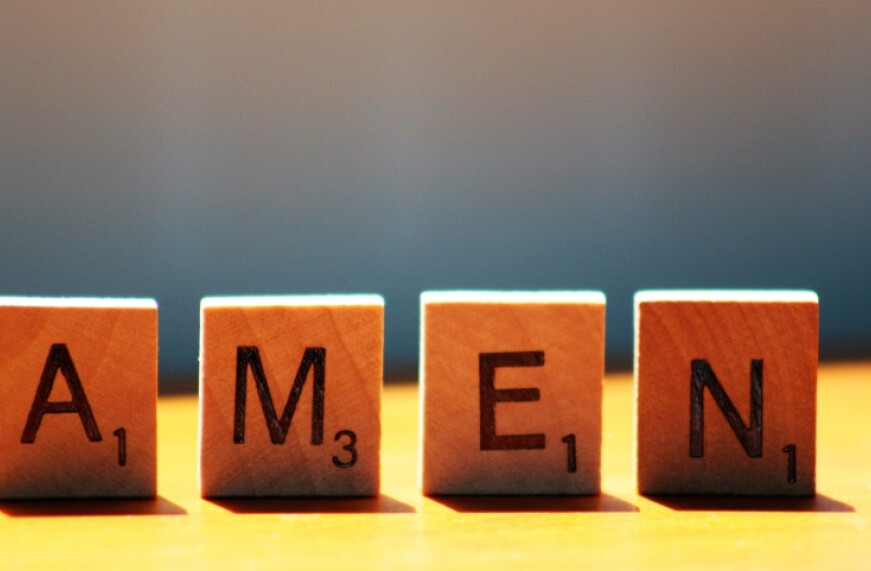 There is a word that we use every time we pray, but holds an especially important place in the Mass. Amen. Now there are two ways to translate the word Amen, one is more a direct translation and the other is more indirect. The direct translation of Amen is “So be it” and the more indirect way is “I believe”. I am going to use both, because I want to look at two contexts in which we say this wonderful word.

The first and most common time we say Amen is after everyday prayers such as at meal prayers, Hail Mary, Our Father etc. A beautiful exercise to do is to very slowly and intentionally pray these prayers and then complete them by saying the translation of Amen: so be it. I think we will find the prayer takes on a new depth, because we are saying that we believe everything we just prayed.

But there is also another dynamic here, we often offer these prayers up for a particular intention. For the family member who has cancer, for world peace, for an increase of faith. And we lift up these prayers concluding with Amen, so be it, I believe. We are telling God, “Lord I ask you for this particular favor, I believe you hear me and will answer me, but also so be it to your will, not mine when and how you answer.” It is statement of trust, we entrust our intention to God knowing he will answer it in the best possible way.

The second time we say Amen I want to talk about is in the Mass. Amen is used many times during Mass, but I want to focus on one particular moment. When we process up the aisle to the altar, a minister will raise the host before our eyes and say, “The Body of Christ.” To which we respond, Amen. So be it. I believe.

We should never forget the power of this word in this moment. At the words, “The Body of Christ” we are saying I believe that the host which looks like bread before my eyes is in reality the Body, Blood, Soul and Divinity of Jesus Christ who suffered and died for me. It is also an act of the will, so be it. It is a profound profession of faith.

Amen is a word of finality. Of saying what was just heard is true and real. It is true that God hears my prayers and it is real he will answer them. It is true that the bread is changed into Jesus and it is not a symbol, it is the real Jesus, the same one who laid in a manger and hung on the cross. Amen, I believe, so be it.

Note: While the translations are beautiful to know, it is more fitting to say Amen rather than “so be it” or “I believe” at the time for Communion because it encompasses everything and more that was stated above.